Centrosome and Chromosome Instability in Cancer

Genomic instability is a hallmark of cancer and promotes the formation of aggressive tumors.

For some cancers, genome-wide alterations are not only common but occur early during cancer progression. Genomic instability can arise by multiple means. Notably, defects in centrosomes, the tiny organelles that facilitate cell division, are common in cancer, and cells with abnormal centrosome numbers experience mitotic errors that cause genomic instability. In addition, the extracellular environment of precancerous cells has a profound influence on various processes, such as maintaining cell polarity and the proper orientation of stem cell divisions -- errors in these processes can promote tumorigenesis and progression to metastasis. In collaboration with Drs. Anne Cress and Noel Warfel (UA Cancer Center), we are studying mechanisms that cause genomic instability using a model system developed in-house for that specific purpose (photo). Our goal is to identify specific molecular aberrations that drive genomic instability, and then exploit this knowledge to (1) develop therapeutic interventions that suppress genomic instability and (2) identify new markers that can be used to diagnose early stage cancer cells in patients. 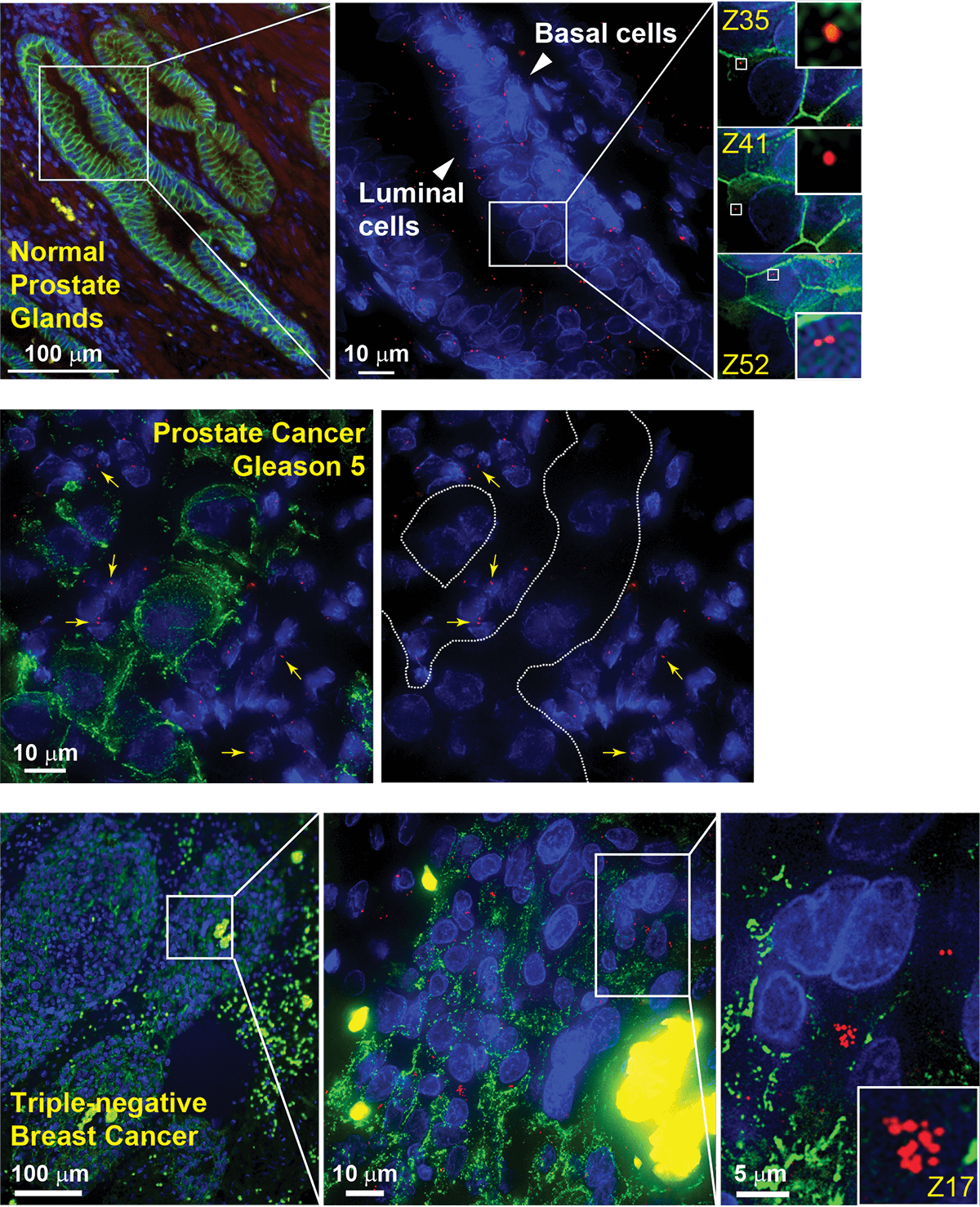 Chromosomal instability (CIN) is a well-established hallmark of cancer cells and has been implicated in all stages of tumor evolution, from initiation to metastasis, due to its potential to create oncogenic genomic alterations.

Building off our analyses of centrosome biogenesis in the fruit fly, we study centrosome aberrations as a major causal factor in promoting CIN in prostate cancer (PCa).  Unlike many cancers, PCa does not harbor signature mutations in key oncogenes and tumor-suppressor genes.  Instead, primary prostate tumors display wide-spread CIN which may be a 'driver' of tumorigenesis in this organ.

Centrosomes dramatically influence genomic integrity because they are crucial to mitotic spindle pole organization and spindle shape control, which coordinately govern mitotic chromosome segregation. Importantly, changes in the number of centrosomes per cell leads to a high frequency of CIN. Our study of centrosomes in PCa (Wang et al., Oncogene, 2020) is significant because (1) it is the first to provide a mechanism for the cause of CIN in early prostate tumors.  (2) Centrosomes are frequently overduplicated (amplified) in many types of cancer, promoting both CIN and tumorigenesis.  However, the opposite condition, centrosome loss has never been reported in any cancer.  This is surprising because mitotic spindles are still able to form in the absence of centrosomes and these are error prone, producing identical types of CIN.  Thus, one would expect that centrosome loss would be observed in cancer.  Ours is the first study to show centrosome loss in any human cancer.  (3)  Using a chemical inhibitor of centrosome duplication and CRISPR editing, we induced either chronic or transient centrosome loss in a non-tumorigenic prostate epithelial cell line for several days.  In either case, centrosome loss induced a sufficient amount of CIN to transform cells and promote invasive tumor formation in a mouse xenograft model, producing tumors that have classic features of malignant and high grade primary human prostate carcinoma.  Thus, this is the first demonstration that centrosome loss has oncogenic potential.