At the centrosome core lies a pair of 'mother-daughter' centrioles, barrel-shaped structures that act as the duplicating elements of the organelle.  Normally, the centriole pair duplicates only once each cell cycle and, during mitotic entry, centrioles recruit a shell of pericentriolar material (PCM) – a process called 'maturation' – from which microtubules grow.   Not only are they one of the largest protein complexes in eukaryotic cells but one of the most ancient of organelles, and have fascinated cell biologists since their discovery in the late 19th century.

During the past 20 years, advances in imaging, proteomics and functional genomic screens have led to an explosion of discoveries in the centrosome field.   At present, we have a complete inventory of the proteins comprising centrosomes.   In our model system, Drosophila melanogaster, centrosomes assemble from a surprisingly small number of components (less than 20).   Despite these advances, many important questions remain unanswered.   Although only two conserved master-regulators, Polo kinase and Polo-like kinase 4 (Plk4), initiate centriole maturation and duplication, respectively, it is not known how they are activated specifically on centrioles.  Also, what are the phosphorylation targets of these kinases and how do they promote centriole duplication and maturation?  How are mother centrioles restrained to spawn only a single daughter once per cell cycle? How is centriole length controlled? Understanding these processes at the molecular level is important because alterations in centrosome function or number cause a number of serious pathologies, including birth defects, ciliopathies and cancer. 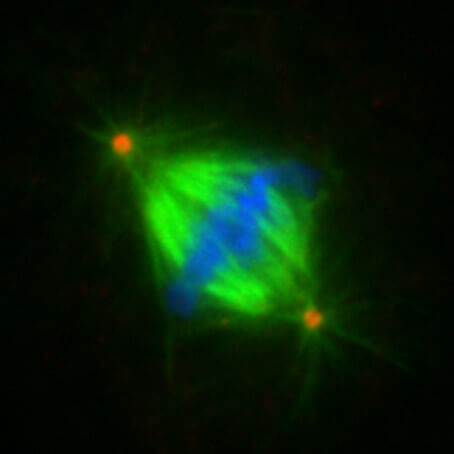 A. The mitotic spindle of a fruit fly cell. The two centrosomes (red dots) are important for generating and organizing the spindle, which is a molecular machine required to capture and position the mitotic chomosomes (blue), and ultimately segregate them to two daughter cells. The spindle fibers are microtubules (green) which grow from centrosomes, attach to chromosomes and ultimately guide them to one or the other centrosome. Normal spindles are 'bipolar' because they have 2 poles, where each pole is organized around a centrosome. 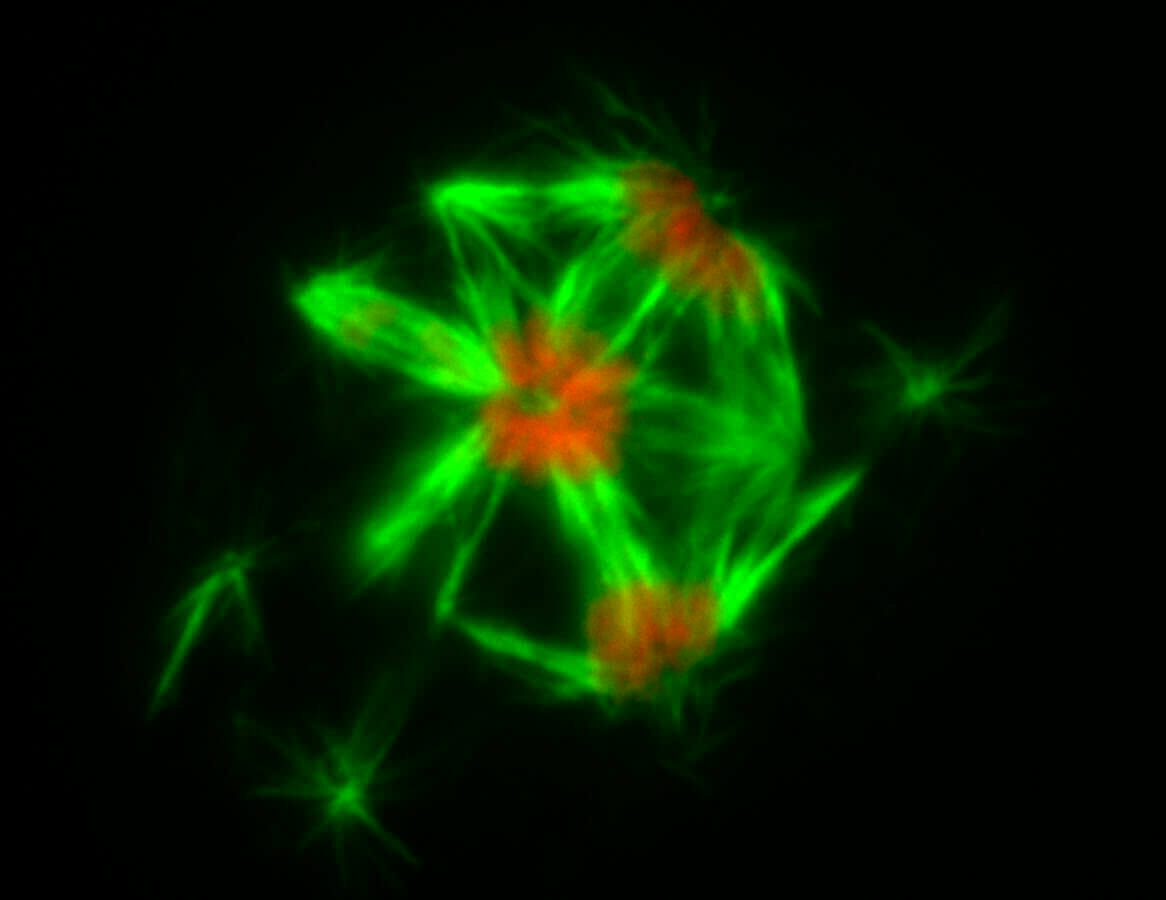 B. A multipolar spindle of a mitotic fruit fly cell. Unlike a normal 'bipolar' spindle (e.g., in A) which has two poles, this spindle contains too many (>2) poles. In this situation, chromosomes may be segregated into too many (>2) masses, causing the resulting daughter cells to receive an incorrect allotment of the parent cell's genome. Having too few (<2) or too many (>2) centrosomes can be catastrophic for genomic stability. In this image, microtubules are green and mitotic chomosomes are red.

Plk4 is the centerpiece of our research program because it is both necessary and sufficient to induce centrosome overduplication (amplification) when overexpressed, a scenario observed in cancer cells.  We have published a series of studies that have defined Plk4 regulation and identified several of its substrates.   Notably, Plk4 utilizes multiple mechanisms of control to restrain its activity and prevent rampant centrosome overduplication, using an elaborate combination of autophosphorylation, ubiquitination and autoinhibition.  Building on our progress, we propose to extend our studies that will define the mechanisms underlying the five sequential steps in the assembly process.  Specifically, we are interested in determining (i) how a single site of daughter centriole assembly is selected on mother centrioles, (ii) the composition of the pre-procentrioles and how it forms, (iii) how nascent daughter centrioles assemble, (iv) how centriole growth is controlled, and (v) the initial steps in centrosome maturation.

Errors in chromosome segregation during cell division can result in the production of aneuploid daughter cells.

This is particularly devastating during development, as aneuploidy is an underlying cause of miscarriage, birth defects, and cancers. During cell division, the accurate transmission of replicated chromosomes depends on the assembly of a bipolar spindle which is facilitated by the presence of centrioles, tiny organelles that help generate and organize spindle microtubules. Normally cells contain a single centriole pair, each duplicating only once prior to entering cell division. However, these mother centrioles have the capacity to assemble multiple daughters simultaneously (photo). If cells assemble excess daughter centrioles (known as centriole amplification), then multipolar spindle assembly can ensue, leading to aneuploidy and increased risk for miscarriage/birth defects and cancer. In normal cells, what limits mother centrioles to assemble only a single daughter is unknown. It is known, however, that Polo-like kinase 4 (Plk4), the conserved master-initiator of centriole assembly, plays a key role in the duplication process. Therefore, a major goal of the Rogers lab is discovering how Plk4 works and how Plk4's activity is regulated. 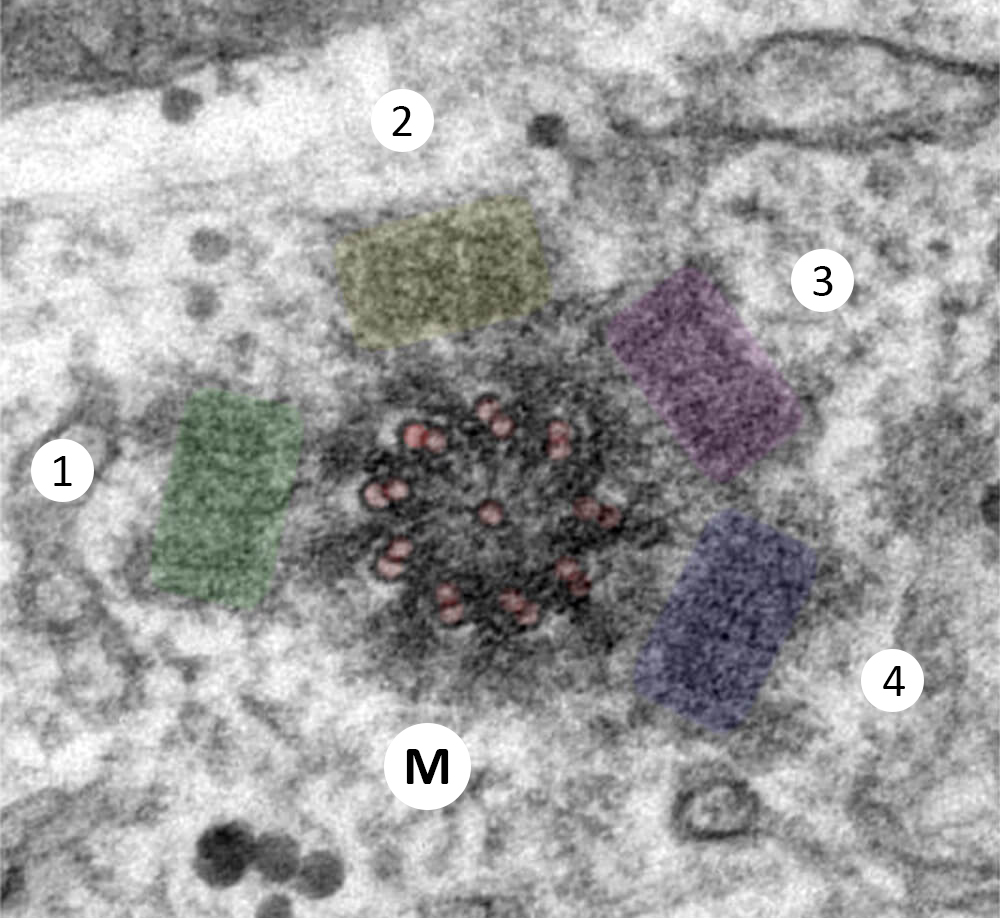 A transmission electron microsope image of an 'amplifying centriole' in a fruit fly cell. At the core of the centrosome, the mother centriole (M; seen end-on; its microtubules psuedo-colored red) is spawning at least four daughter centrioles (1-4; seen side-on and psuedo-colored). Taken from G. C. Rogers, et al. 2009, JCB 184(2): 225–239.